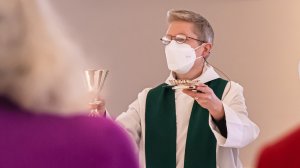 The Very Rev. Ginny Wilder held her first service as Rector at St. Anne’s on Sunday, September 24, 2017. A native of South Carolina, Ginny came to Winston-Salem after serving as associate Rector at Trinity Episcopal Parish in Wilmington, Delaware for five and a half years.  Ginny currently serves on the diocesan council, the charter committee for lifelong Christian formation, the charter committee for campus chaplains and young adult ministry, committee for Latino ministry and the MRST Grant board for the diocese.  Ginny is currently the dean of the Winston Salem Episcopal convocation.

In Ginny’s free time Ginny enjoys riding the elliptigo bike, hiking, fishing, gardening, writing music, and spending time with Barbie (Ginny’s spouse) and their dogs Riley and Martin.  Ginny is the bonus parent to Barbie’s two children, Bill- who lives in Baltimore with his wife Louise, and Mary Stuart, a senior at App State.

Ginny believes her call is to help build community both on and off the church grounds using creative means to bring God’s people together. Prior to completing an M. Div at Virginia Theological Seminary 2012, she had been the training and development manager for Biltmore Estate Information and Sales Center in Asheville, N.C. Ginny also holds a B.A. in sociology and anthropology from Warren Wilson College and a M.S. in human resources development from Western Carolina University. In addition to being a priest, she is also a musician who has released seven albums. Ginny and her wife, Barbie, are excited to be a part of the St. Anne’s community and actively participate in the rich faith and civic life available in Winston-Salem. 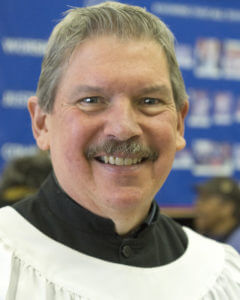 David has been a choral clinician and adjudicator for numerous workshops including the North Carolina All-State Chorus and Honors Chorus, Kentucky All-State Chorus, and Indiana All-State Men’s Choir. His choruses have sung on programs of the Music Educators National Conference, southern division conventions of the American Choral Directors Association, and the Spoleto Festival in Charleston, South Carolina.

In 2004, he received the Lara Hoggard Award for Distinguished Service in Choral Music in North Carolina from the North Carolina state chapter of the American Choral Directors Association. 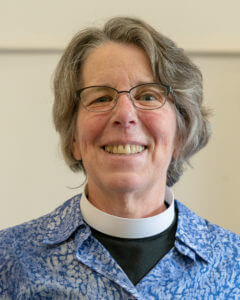 Mary was a member of St. Anne’s from late 1974 until her ordination in May 1991. Mary did her discernment for the diaconate among the community of St. Anne’s. She has served as a deacon in various capacities since 1991 and as of April 2018 Mary serves as St. Anne’s deacon. Welcome home, Mary. Below is some information about Mary.

“I have three adult daughters and five grandchildren. You may encounter me on local and mountain trails since I frequently hike. My time in nature offers a wondrous sanctuary for prayer and reflection. I am semi-retired and work only a couple days a week as a physical therapist. Throughout my career as a physical therapist, I have worked in a state psychiatric hospital, in homes, and in hospitals. These various settings have helped shape me for ministry with the dying, and those who experience loss. In the past two years, I have branched out to tutoring students at my neighborhood Title 1 school. (PSA: Teachers can always use help!). Tutoring has opened my eyes to the inequalities of our local schools. 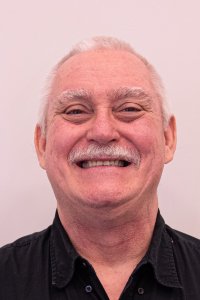 Mark is also a musician and wears a variety of musical hats as a performer, composer and teacher. He studied oboe in high school at UNCSA and continued his training in Ohio, earning a doctorate at Cincinnati College-Conservatory of Music. Currently, he is a freelance musician in North Carolina, performing with the Piedmont Wind Symphony and other orchestras and chamber groups.

As an instructor of music theory, history, music technology and music appreciation, Mark has taught at Cincinnati-College of Music, the University of North Carolina at Greensboro and at Forsyth Technical Community College. He also enjoys teaching in his modest oboe studio in Winston-Salem, and is proud of his students who consistently win statewide competitions and auditions. 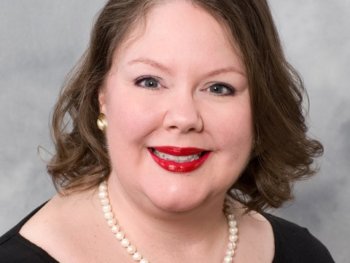 A native of Valdosta, Georgia, Lauren Willard began her collegiate studies in music at Carson-Newman University (Jefferson City, Tennessee) and completed a Bachelor of Music degree with a major in piano performance at Valdosta State University.  In May 2019 she completed a second bachelor’s degree with dual majors in organ and vocal performance at Salem College, and in late August she will begin coursework towards a graduate degree in organ at Salem, studying with Tim Olsen.

All services follow Rite II in the Book of Common Prayer

Part of the Worldwide Anglican Communion.